EXIT THE TRAP. PUNCHING UP VOMITING TORTURING YOURSELF: THERAPY IN SHORT TIMES

Getting out of the trap of bulimia and vomiting. therapy in a short time 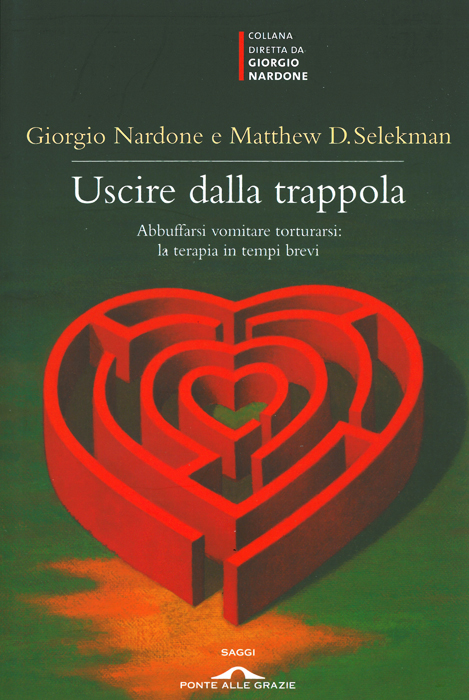 Binge eating and throwing up, cutting yourself with a razor blade or burning yourself with a cigarette, abusing alcohol and drugs:
often behind these behaviors, only apparently self-destructive, there is the trap of compulsion, which from a sedative expedient and an outlet for psychic suffering is transformed into irrepressible pleasure. It is from here that it is possible to demonstrate how bulimia and self-harm, today increasingly common among young people and adolescents, are not distinct diagnostic categories, but two sides of the same coin, and that they should be treated as such.
The authors support the possibility of a rapid and strategic intervention, of a therapeutic model tailored to the patient and capable of overturning the perverse logic of the disorder. According to the "technological" approach discussed in these pages, the most effective solutions, developed "in the field", define and describe the pathology: in other words, knowledge derives from concrete change in the patient's life, and not from a theoretical or statistical framework which is assumed to be infallible and immutable.

Alongside the exhibition of various clinical cases, a vast and imaginative repertoire of therapeutic tricks developed by Matthew Selekman and Giorgio Nardone is presented, united by a twenty-year path of research and intervention that respects the patient's social and family singularity, leveraging on his talents and resources, in a never definitive synthesis of rigor and creativity.