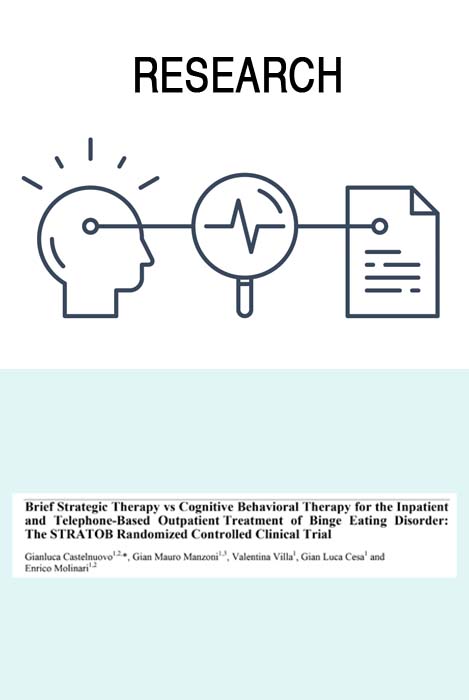 This paper describes the results of the STRATOB (Systemic and STRATegic psychotherapy for OBesity) study, a two-arm randomized controlled clinical trial (RCT) comparing Brief Strategic Therapy (BST, Nardone or Arezzo model) with the gold standard CBT (Cognitive Behavioral Therapy) for the inpatient and telephone-based outpatient treatment of obese people with Binge Eating Disorder (BED) seeking treatment for weight reduction. Primary outcome measure of the randomized trial was change in the Global Index of the Outcome Questionnaire (OQ 45.2). Secondary outcome measures were BED remission (weekly binge episodes < 2) and weight loss. Data were collected at baseline, at discharge from the hospital (c.a. 1 month after) and after 6 months from discharge. No significant difference between groups (BST vs CBT) was found in the primary outcome at discharge. However, a greater improvement was seen in the BST vs the CBT group (P<.01) in the primary outcome at 6 months. About secondary outcomes, no significant difference between groups were found in weight change both at discharge and at 6 months. Notably, a significant association emerged between treatment groups and BED remission at 6 months in favor of BST (only 20% of patients in BST group reported a number of weekly binge episodes > 2 vs 63.3% in CBT group).