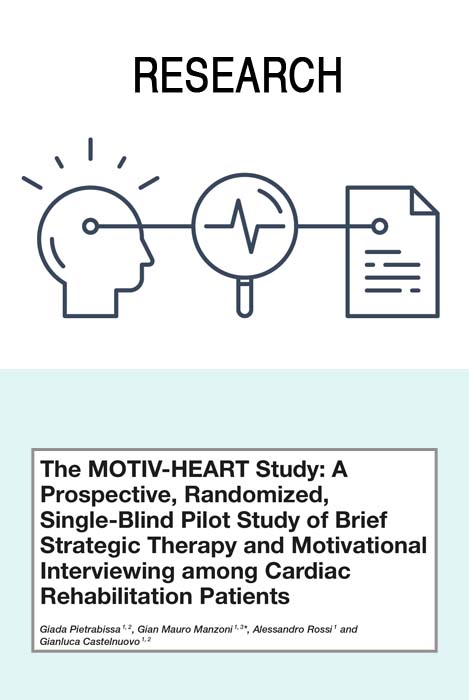 Objective: This prospective, randomized, single-blind pilot study aimed at testing the incremental efficacy of Brief Strategic Therapy (BST) combined with Motivational Interviewing (MI) in improving selected biomedical and psychological outcomes over and beyond those of the stand-alone BST in a residential Cardiac Rehabilitation (CR) program.

Results: At discharge, no significant between-group difference was found in any outcome variable. Changes from pre- to post-treatment within each condition showed significant improvements only in the BST group, where the level of external regulation diminished, and both the participants’ self-regulation (Relative Autonomous Motivation Index, RAI) and willingness to change improved. At the 3-month follow-up, within-group analyses on responders (BST = 9; BST + MI = 11) showed a statistically significant improvement in the level of systolic blood pressure in both groups.

Discussion: Findings showed no evidence of the incremental efficacy of combining BST and MI over and beyond BST alone on either selected biomedical or psychological outcomes among CR patients.

Conclusions: Ends and limitations from the present pilot study should be considered and addressed in future investigations.